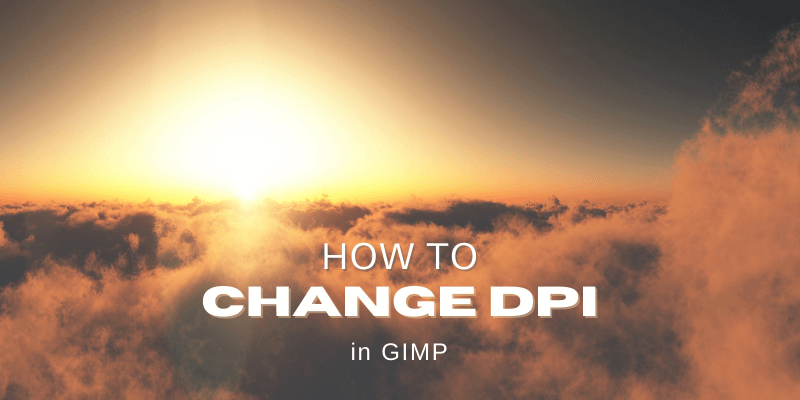 Image resolution can be one of the more difficult technical concepts to wrap your head around when you’re just starting out in the world of digital imagery. If you’ve ever tried printing out an image from the web and gotten a blurry mess in your output tray, you’ve already run into the problem.

But if you’ve got an image editor like GIMP, you can change the resolution of your image file and have it print more clearly. It will probably print out smaller than you see it on-screen (how much will depend on the specific monitor you’re using) but that’s an inescapable consequence of the difference between screen and print resolution – more on that later if you’re interested!

The Quick Guide to Change DPI in GIMP

Here’s how you can change the DPI of your image in GIMP:

Step 2: Enter your desired resolution in the X Resolution box, and the Y Resolution will update as well. Click the Scale button to finalize the change.

You won’t notice a difference on-screen, but you have now successfully changed the image’s DPI in GIMP!

If you’re already familiar with image editing concepts and just needed to know where to look for the resolution options, you’ll have everything you need. If you want a bit more of an explanation of the process, read on!

The Detailed Guide to Change DPI in GIMP

There isn’t too much more detail to go into, since the process is quite simple, but I’ll follow my usual format anyways. Here’s how (and why) to change DPI!

With your image loaded and ready in GIMP, open the Image menu and click Scale Image.

We’re not actually going to change the image itself, just the instructions in the image file that tell programs what resolution the image is supposed to be interpreted at.

GIMP will open the Scale Image dialog box, shown below.

Your image’s width and height in pixels are shown at the top and the resolution in pixels below. Make sure that you don’t change the Width or Height settings at all since that will actually change the number of pixels in your image. Instead, we need to focus on the X resolution and Y resolution options.

This image is currently set to 300 pixels per inch, but since it’s only 1914 x 1276 pixels wide, that makes for a fairly small image – just over 6” x 4”. I want a print, but it’s going to be seen from a distance instead of up close, so a lower resolution will still look good and let me print a larger image.

Just enter the new resolution into the X resolution box, and the Y resolution box will update as long as the two are linked. This is indicated by the small chain link icon between the two boxes, although I can’t think of a situation where it would be a good idea to unlink them – so leave that part as-is.

If you want to see the print size of your image, you can change the px dropdown beside Width and Height to inches, centimeters, or whatever units you like.

Once you’re satisfied, click the Scale button and you’re done!

In the early days of desktop publishing (long enough ago that it was still called that), the idea was fairly simple because screen resolution was primarily limited by the technical capabilities of the time.

Apple’s controlled hardware ecosystem gave us the most common standard explanation that screen resolution is 72 DPI – but that was chosen because their best printer at the time, the Apple ImageWriter, was capable of 144 DPI output, exactly twice the screen resolution – which is considered low by today’s standards.

But in a world of high-resolution monitors and high-DPI smartphones, the idea gets much more confusing. My PC monitor is a 27” monitor using the QuadHD resolution of 2560×1440, which actually works out to 109 DPI. But if I used the same QuadHD resolution on a 24” monitor, the DPI would be even higher.

So while it’s useful to know that standard screen resolution for an image file is typically considered to be 72 DPI, that doesn’t really correlate to how your image is actually displayed on a monitor, and there are quite a number of other variables that it’s impossible to account for.

If you want to learn more about the technical side of this world, there’s a long and detailed article on Wikipedia, but it’s very definitely not required reading for you to continue as an image editor!

That’s everything there is to know about how to change DPI in GIMP, as well as a bit of extra technical knowledge for your own personal edification.