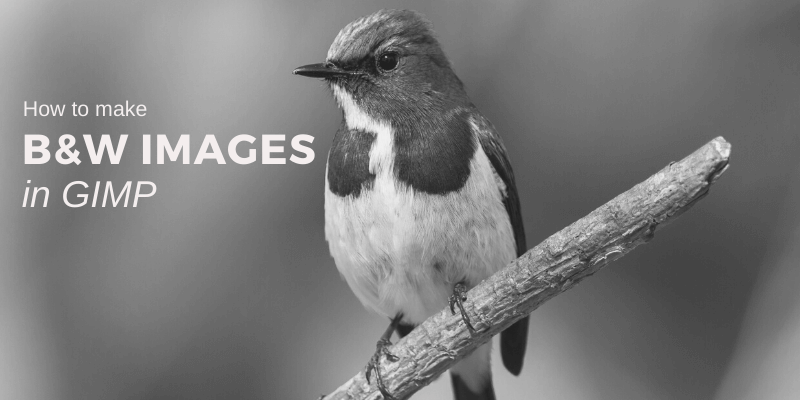 There’s something almost magical about a well-prepared black and white image. Colors are beautiful, of course, but stripping them away leaves you with the very bare bones of photography: light, shadow, and their interweaving dance across form and shape.

It probably won’t surprise you to learn that there are several different ways you can convert an image to black and white in GIMP. There are a couple of fast ways to do it, and also a much more time-consuming method – but that extra time also gives you the ultimate control over your conversion results.

The Quick Guide to Make an Image Black and White

There are two very fast ways to turn an image black and white, although they each have their own quirks. For most situations, I’d recommend using the Desaturate method for its extra flexibility, but you’ll have to decide what’s best for your unique situation.

This is the simplest kind of grayscale image because it actually changes the structure of the image. Most digital images are RGB mode images, which are blended together from a Red channel, a Green channel, and a Blue channel to make a full-color image.

If you switch your image to Grayscale mode, those three channels are converted into a single channel, balanced against each other according to GIMP’s grayscale conversion algorithm.

This also means the image is no longer capable of containing color data of any kind.

There’s only one step to this process: open the Image menu, select Mode, and then click Grayscale. Your image will be instantly converted into a grayscale image that only contains white, black, or gray pixels  – otherwise known as grayscale or black and white.

This process is almost as fast as the Grayscale method above, except that your image stays in the RGB mode with three channels. All the pixels will be converted to grays, but the image itself is still capable of supporting color.

This is helpful if you want to add a particular color cast to your black and white image. Many popular black and white films had a slight color tinge to them, which can really change the overall mood of the image without actually adding very noticeable color.

Even the desaturation method has several methods that produce the same result, but the easiest way to desaturate your image is to open the Colors menu, select the Desaturate submenu, and then choose Desaturate.

The default settings are fine, but feel free to experiment with them a bit to get a better understanding of how GIMP works.

Those two methods are perfect for making quick edits, but if you’re a demanding photographer who wants total control over how colors are converted into grayscale, then you’re going to want to read on to learn about the ultimate black and white conversion tool in GIMP: the Mono Mixer.

Channel Mixing for Perfect Black and White Images in GIMP

If you read through the Grayscale Mode Method section, you remember that most computer images are created by combining Red, Green, and Blue color channels to show any color.

Each color channel is actually a black and white image, but the white pixels in each channel correspond to the color of the channel. White pixels in the Red channel show up as red, and when there’s a white pixel in the Blue channel in the same spot, they’re combined to create the proper color in the full RGB image.

Some of you might have begun to guess where this is going: when you’re converting the RGB channels into grayscale, it’s possible to control how much each channel contributes to the overall black and white result.

If you’re editing a picture of a bright green fern, you can boost the Green channel to appear brighter than the other two channels, which would leave you with a bright white fern against a dark background.

If you’re editing a picture of a strawberry growing on a vine, you could push the Red channel to appear brighter and the Green channel to be dark, so you’d get a pale strawberry showing up brightly against dark foliage after the conversion.

Getting Started with the Mono Mixer

In this example image, a Scarlet Ibis living at the Toronto Zoo is framed against some dark green foliage. As you can see, the basic Desaturate method I outlined earlier successfully turns the image black and white, but it’s a pretty boring, low-contrast result that loses a lot of the ‘color pop’ appeal found in the original version.

By using the Mono Mixer, we can create very different black and white conversion results from the same image. To get started, open up the Colors menu, select the Desaturate submenu, and then click Mono Mixer.

You’ll get the Mono Mixer dialog window, which lets you experiment with different ratios between the three color channels, and you’ll be able to see a real-time preview of the results in the main image window.

Even without adjusting the settings at all, the Mono Mixer often provides a better conversion result. You’ll notice that the bird’s feathers stand out more noticeably from the leaves in the background, but I can create an even more interesting result by adjusting the Red and Green channels.

By default, each channel is equally weighted to provide 33.3% of the data for the final output result. Since we’ve got a red bird on a green background, we’re going to want to adjust the settings for the Red Channel Multiplier and the Green Channel Multiplier.

The first time you use the Mono Mixer, it can be helpful to use an image with strong colors so that you can clearly get a sense of how the RGB color model works, and how each color channel contributes to the overall image.

In the case of the Scarlet Ibis, the channels I needed to edit were fairly obvious, but it’s not always so clear-cut.

Because it can be very difficult to get a sense of how color channels work at the beginning, the best advice is to go slowly and increase or decrease each channel’s multiplier a little at a time until you’re starting to see the results that you want.

Depending on your image, it can be very easy to create wildly unexpected results by rapidly changing the settings before you get a more intuitive sense of how they work together within your image.

I’ve found myself surprised when using this channel mixing technique a few times when the Blue channel contained unexpected noise data or pixels that seemed neutrally-tinted were suddenly very over-represented – which even occurred while prepping this article.

As you can see above, removing too much of the Blue channel made the blurred areas of the enclosure ceiling stand out quite strangely from the background. Even though they’re just the faintest blue in the color version of the image, they’re still very noticeable in the Blue channel when you start adjusting it.

Last but not least, I should mention the Preserve Luminosity option. From what I understand, it’s something of a cheat – it applies some sort of normalization to the channel ratios to prevent blown-out highlights, but unfortunately, the official GIMP documentation isn’t very clear about what it’s actually doing:

Calculations may result in too high values and an image too much clear. This option lessens the luminosities of the color channels while keeping a good visual ratio between them. So, you can change the relative weight of the colors without changing the overall luminosity.

Feel free to experiment with it in your own image and see if it helps you create the result you want, but you’re better off just being careful with your individual channel multiplier settings.

That’s just about everything there is to know about how to make an image black and white in GIMP, but if you want to delve even deeper into the process, there are some even more advanced techniques that use different color spaces such as Lab color to give you even more flexibility.

If there’s enough interest, maybe I’ll do an advanced conversion article – let me know in the comments!