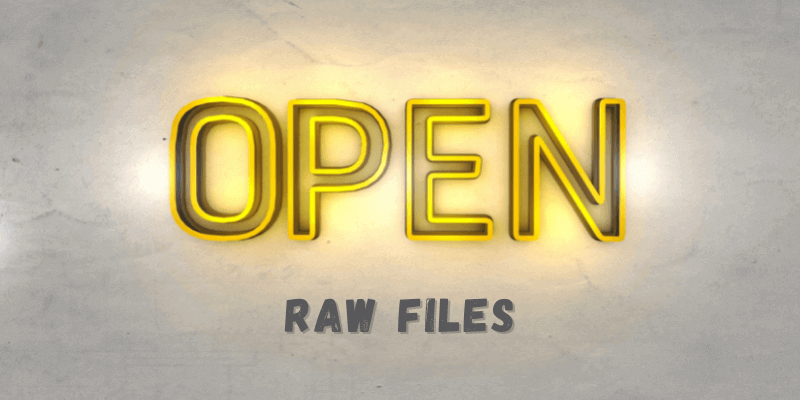 Modern cameras use RAW formats to get the best possible image quality, and most camera manufacturers use their own unique proprietary version of a RAW file. For example, Nikon cameras use the NEF format. GIMP doesn’t know how to open RAW files by default, but there are a few different ways to get around this problem.

You’ll need to install a secondary program to handle your RAW files called a RAW processor.

The two leading options are darktable and RawTherapee. They can both open any RAW files produced by a modern camera, and they integrate seamlessly and instantly with GIMP.

Once you’ve got an appropriate processor installed, opening a RAW file in GIMP will automatically launch it as a plugin. You can apply any non-destructive adjustments you want, and then it passes the processed RAW file directly back into GIMP for additional editing and closes itself.

There are a couple of other methods to open RAW files in GIMP, but those two programs are the best free options available. To learn about how you can add them into your workflow and to discover some additional RAW processing options for GIMP, read on!

Because GIMP’s developers don’t build in native RAW support, you’ll need to choose an external RAW processor in order to open and edit your RAW files in GIMP.

There are four popular RAW processors that are available free: darktable, RawTherapee,  nufraw, and DCRaw. Each one is compatible with Windows, macOS, and Linux, so you’ve got a full range of choices no matter where you’re using GIMP. Isn’t free software great?

The first two options in the list – darktable and RawTherapy – also function as standalone programs, and they both work quite well. If GIMP is the open-source movement’s recreation of Photoshop, then these two are the response to Lightroom and the world of RAW photography.

If you don’t want to set up a full RAW workflow or you just want to edit the occasional RAW file, DCRaw and nUFRaw are a couple of more basic processors that can open RAW files in GIMP. They’re not really ready for the average home user, though, so I can’t recommend them.

If you want to experiment with all of them, it’s easy to switch between back and forth at any time in your GIMP settings. I’ve got a quick how-to guide at the end of this article, but let’s take a look at the 4 options in a bit more detail.

darktable shares the Lightroom-style photo editor interface that has become more or less standard across every release in the last decade. It’s simple, familiar, and effective, but the surface similarity disappears once you get under the hood and start editing your RAW file.

Just about every possible edit under the sun is available here, which will be welcomed by advanced users but can be a bit daunting for beginners. If you’re switching to GIMP from the Adobe ecosystem, keep in mind that there’s a bit of a learning curve, even for expert editors!

That being said, if you’re willing to take the time to learn darktable’s extensive set of adjustments, you gain an impressive degree of control over how your RAW files open in GIMP.

I find the interface design style focuses a bit too much on very similar grey colors without balancing the typography, and it makes it a bit too easy to get lost in the collapsible menus on the right.

That’s a minor issue, obviously, and it might not bother you at all. You can also experiment with different themes to find something that suits you, although the built-in options are just minor variations of the default light and dark modes.

I cannot imagine why the developers would choose this name, but aside from that, the program itself is my favorite open-source RAW image editor. It’s not often that I find free software that really challenges a paid program I use regularly, but RawTherapee is just such a program.

It has a polished interface that feels familiar enough for quick onboarding but includes some unique design decisions that work quite well. The color choices are separate enough to create proper separation between panels, preventing the visual confusion we saw in darktable.

The editing tasks are neatly divided into related sections to cut down on the clutter, and slider adjustments appear with decent responsiveness in the main editing window.

There are even some editing options in there that will probably be unfamiliar to users coming from the world of paid software, and even the more familiar tools often include extra degrees of control. These might not be helpful for everyone, but it provides room to learn if you want it.

The nice thing about RT compared to darktable is that it still puts the more common adjustments upfront, allowing you to deep-dive if you want to, instead of forcing you to wade through a bunch of unnecessary tools just to get to basics.

RawTherapee also has an excellent online help database called the Rawpedia which can be a great help when you’re first starting out with it, and it’s available in multiple languages.

Many of you searching for ways to open RAW files with GIMP have probably seen articles telling you that you can use UFRaw as a plugin for GIMP. Unfortunately, this no longer seems to be possible.

It was a viable option quite a few years ago, but the project hasn’t been updated since 2016 and it doesn’t seem to work with GIMP 2.10+ in my testing. The non-plugin version is still available and working, although it doesn’t allow you to open RAW files from within GIMP itself.

Enter nUFRaw – new Unidentified Flying Raw, to give it its full and proper name – a revamped version of the UFRaw raw processor that unfortunately seems to have copied a few of the issues found in its predecessor.

In short, it doesn’t seem to work properly yet. I experimented with nUFRaw for a while without any success on my Windows 10 machine, and I didn’t have any better luck trying to install it on my Mac.

A quick check of the version number shows that the project is still quite new (version 0.43), so hopefully, the developers will be smoothing out these particular issues in the coming months. According to its Sourceforge page, it’s still in active development, so sit tight for a third option!

If you’re an experienced Linux user or you’re looking to give yourself a bit of a challenge, you might want to try experimenting with DCRaw. Be warned, though – this is free software in its most refined essence, not something that is neatly packaged for consumer consumption.

DCRaw is the work of Dave Coffin (the DC in DCRaw), and because it’s open-source, many of the most popular RAW image editors use it as the basis of their RAW processing engines.

However, Coffin doesn’t exactly provide a walkthrough for how to turn it into a usable app. A link is provided to precompiled Windows-compatible executables, but at the time of this writing, it was a broken link and I couldn’t find any other pre-compiled versions that I was willing to trust.

It would easily be possible for me to write an entire article just about how to install DCRaw, so I don’t really have the space to do a full explanation here – especially when you can get 99% of the fun/frustration by simply experimenting with nUFRaw 😉

Still, if getting nUFRaw working seemed too easy and compiling your own plugin files from the C source code seems like a fun time to you, then you can find the gloriously unpretentious official website here.

If you’re still not sure which method you want to use to open RAW files in GIMP, there’s a way that you can easily and quickly compare your options:

1. Start by installing at least two different RAW processors from the available options. I’d recommend darktable and RawTherapee to start with, but since they’re free, you might as well try all the ones you can get working!

2. Click the Edit menu and choose Preferences. In the Preferences dialog window, choose Image Import & Export from the left column.

3. At the bottom of the Image Import & Export settings, you’ll find Raw Image Importer. Just select whichever plugin you’d like to use, and click OK.

4. You may need to restart GIMP for the change to take effect. The next time you open a RAW file in GIMP, it will open with your selected RAW processor!

A Last Word About RAW Files in GIMP

No matter if you’re just trying to edit your vacation snapshots with free software or you’re a tech genius willing to explore the intricate world of compiling your own GIMP plugins, you now know just about everything there is to know about the ways you can open RAW files with GIMP!

There is some speculation that the GIMP development team is working on a more simplified approach to opening NEF and other RAW files natively in GIMP, but it’s hard to say when or if this functionality will ever actually be released.