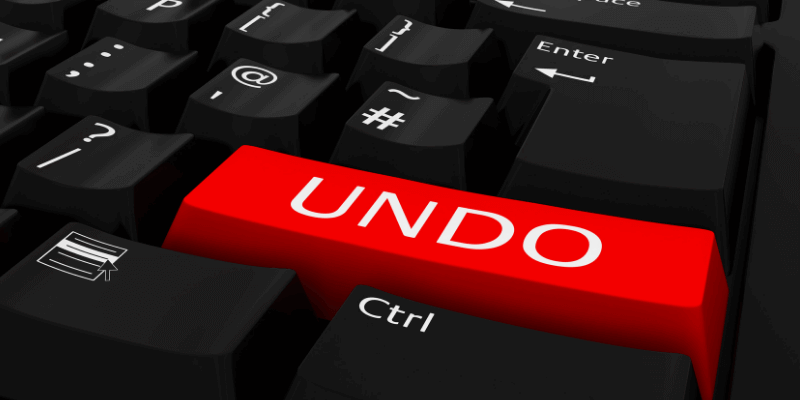 Editing digital images can be a fun project, but even the most skilled editors can make a mistake while they’re working. Enter the most useful feature of any computer program: the Undo command!

Undoing your last action works the same way in GIMP as in most other programs. Simply open the Edit menu in the menu bar and choose Undo. You can also use the universal keyboard shortcut Ctrl + Z to Undo – or if you’re on a Mac, the Command + Z shortcut does the same job.

That’s all there is to it! It’s a good idea to get comfortable using the keyboard shortcut, so you can experiment quickly and then undo your changes if they don’t work out, all without breaking the flow of your edit. Undo should become so natural that you don’t even have to think about it.

If you’re looking for more control over your editing steps and how you use the Undo command, you can read on to learn about minimum Undo steps, Undo memory usage, and the most helpful tool of all: the Undo history panel.

How to Use Undo in Your GIMP Workflow

A simple and universal command like Undo might not seem like a crucial part of good image editing practice, but you’ll be surprised how much you come to rely on it.

Undo and Redo are Best Friends

You can also undo your Undo command if you realize that it was actually a ‘happy accident,’ as legendary painting instructor Bob Ross would call it. Redo the action you just undid by going to the Edit menu and choosing Redo. Ctrl + Y (Command + Y for Mac) are the shortcut keys.

I’ve always found that pairing the Undo and Redo commands together is a great way to quickly compare different editing options. Hit Ctrl + Z, fix the image in your mind, and then press Ctrl + Y to Redo so you can compare the effect of your last edit step (Cmd + Z and Cmd + Y on Mac).

You can even stack your Undos and Redos several repetitions deep to compare more complex edit processes, without having to switch to the Undo history panel (more on that below).

Get comfortable switching back and forth between several steps worth of Undos and Redos, and work those keyboard shortcuts! You can also customize them to a more natural and comfortable pairing by opening the Edit menu and choosing Keyboard Shortcuts.

If you’re just undoing a single action, using the quick keyboard shortcut that I mentioned earlier is your fastest option. But often while you’re editing an image, you’ll want to undo to a specific point, and you’ll drive yourself crazy trying to keep count if you do them one by one.

The Undo History panel gives you a step-by-step log of every action that you’ve performed on the image, allowing you to choose a specific point and step back there instantly. You can jump to any point in the editing process that you want – just remember that if you step back and then make another edit, all the following steps will be lost.

The Undo History panel is extremely useful, so you might want to undock it by clicking the icon and dragging it out onto the workspace. Then you can redock it somewhere else by selecting the icon again and dropping it in a new dock position, so it won’t overlap the Tool Options panel.

How to Unleash More Undo Steps in GIMP

When you get into really complicated edits on high-resolution images, you’re going to need a lot of RAM in your machine to keep things running smoothly. By default, GIMP isn’t allowed to use too much of it, which can limit the number of undo steps your computer will store at one time.

I’ve got 32GB of memory installed on my editing desktop computer, but by default, GIMP is set to only use 4GiB* of that. Fortunately, it’s extremely easy to change this setting to make sure you’re getting the most out of your hardware.

Open the Edit menu and select Preferences. By default, it will be displaying the System Resources section. The two settings we need to look at are right at the top under Resource Consumption.

Minimal number of undo levels sets the number of steps that GIMP will hold in memory regardless of how much memory is used, and Maximum undo memory sets the amount of memory that GIMP will use for undo states before deleting the oldest step.

You’ll have to choose the appropriate setting for your specific situation, but using a quarter of your available RAM should be perfectly safe for your maximum undo memory. You can probably push it higher, but it will depend on your hardware and any other programs you’re running.

Choosing your minimal number of undo levels is a bit trickier because this determines just how much memory GIMP will demand even at the cost of laggy performance. Don’t set this too high, or you might find yourself in trouble the next time you work on a large file.

I’ve actually yet to run out of Undo levels while working with GIMP, but on a modern computer with a lot of RAM, you should be fine setting the minimal number up to at least 10. Again, you can experiment with this yourself, but you may get unexpected results if you push it too much.

That’s just about everything there is to know about how to Undo in GIMP!

Sharp-eyed readers will note that there’s an extra ‘i’ in there, as GiB is the short form of ‘gibibyte’. Yes, you read that right: gibibyte, not gigabyte. They’re similar, but not the same, and for extra precision, GIMP dialog boxes use kibibytes, mebibytes, and gibibytes rather than the more familiar kilobytes, megabytes, and gigabytes.

The prefixes kilo, mega, and giga are from the International Standard of Units and apply to decimal numbers, while kibi, mebi, and gibi are prefixes that apply to binary numbers. You might remember a huge lawsuit against computer storage manufacturers in the mid-2000’s that hinged on this fact.