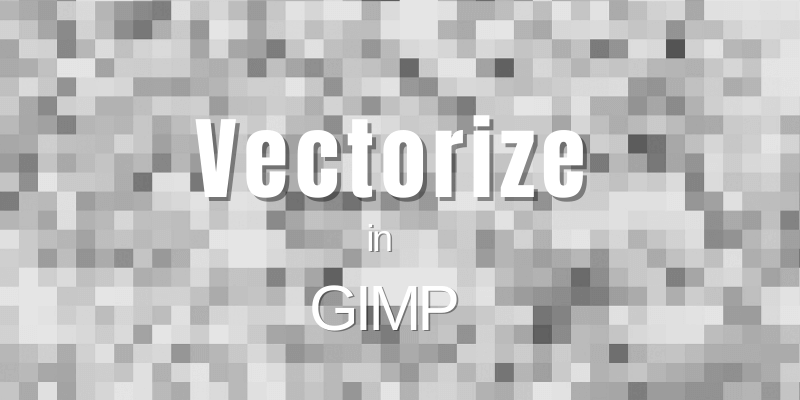 Creating vector images from pixel images is useful for a lot of different design projects, but I have to tell you right from the start that GIMP is not designed for creating vector images. GIMP is a raster image editor, which means it creates and edits pixels, not vectors.

The Paths tool in GIMP does use a Bezier curve system in the same way that vector graphics programs create shapes, but these paths are only used as a means of defining specific areas for pixel editing. The strokes, fills, and patterns of your shapes are all rasterized as pixels immediately, and never exist as vector data.

GIMP does have limited support for the web-friendly vector format SVG (Scalable Vector Graphics), but when I say limited support, I really mean it. You can open SVG files, but that’s about it. An SVG file will probably display better in your web browser than it will in GIMP.

“The SVG format handles many other graphical elements than just paths: among other things, it handles figures such as squares, rectangles, circles, ellipses, regular polygons, etc. GIMP cannot do anything with these entities, but it can load them as paths.” – The official GIMP user manual, Section 5.7

GIMP isn’t the only piece of free image editing software available, so I can point you in the direction of a couple of different options that will let you create vector images properly, with all the fun and time-saving tools that you’ll find in a dedicated vector graphics program.

Vector vs Raster: What’s The Difference?

If you’re new to the world of image editing, you might not have heard the terms raster image and vector image before – and there are even a few more experienced editors who could brush up on their terminology too.

Raster images are the most common form of digital image because they’re composed of pixels in a similar way to your output device (your monitor, in other words). In its most basic form, a raster image is a simple grid of information that describes the color and brightness of each pixel.

Vector images are composed of a series of mathematical equations that describe all elements in the image. The exact shape of each object, the color of each shape, and the order in which the shapes overlap are all stored as equations instead of pixels.

Part of the reason this distinction can be unclear is that vector image formats aren’t very widely supported by web browsers or operating systems (with the exception of open standards like SVG and PDF), so vector images usually get converted into pixel formats like JPG and PNG.

The difference in structure between raster images and vector images means that they each have their own strengths and weaknesses.

Raster images handle color gradients exceptionally well, and they can be easily generated by digital camera sensors, which makes them perfect for creating and editing digital photographs.

But because they are grids of pixels, increasing or decreasing their size can cause unexpected results.

Increasing their size requires GIMP to invent new pixel information to fill the larger dimensions, which it obviously can’t do, so it just scales up the existing data. The result is just a larger but blurrier image because no new information has been added to the file.

Decreasing the size of a raster image means that some pixel information has to be discarded, and once it’s gone, you can’t get it back without using an Undo command during the same editing session. This can often lead to a softer image, although it can be corrected with proper sharpening during the export process.

Vector images don’t suffer from problems with scaling, since all their image data is stored as a set of equations. The equations can be scaled up and down to any required size by simply multiplying or dividing, which your vector editing program will handle automatically for you.

But because vector images have to define each individual image element separately, they’re not well-suited to the extremely complex color variations that are required to create photorealistic images. Even with the tracing tools found in cutting-edge vector illustration programs like Adobe Illustrator, it’s a struggle to create realistic imagery, although they’re a lot of fun to use.

That’s not to say it can’t be done, of course. Many programs have options for point-based gradients that allow impressively complex color shifts, but they’re still not quite as adept at creating smooth transitions that affect an entire image.

Apparently GIMP is not the best option for vectorizing an image, but there are other programs you can use to do this step.

Inkscape is also free open source software like GIMP, and it’s almost as old. It’s arguably the best free vector graphics program available, and it will make your image vectorizing project infinitely easier than trying to do it in GIMP.

Adobe Illustrator is almost as old as Photoshop, and it’s also the industry standard app for vector graphics. It’s available as part of the Adobe Creative Cloud suite or on its own for a monthly subscription and comes with a few extras like Illustrator for iPad and 20GB of online storage.

If you don’t want to deal with Adobe but you’re still looking for a professional-level vector graphics program, Affinity Designer from Serif is an excellent choice. It’s available without a subscription at an affordable price, and there’s a free trial to see if you like it.

The internet is full of misinformation, and some tutorial sites claim that they can teach you to make vectors in GIMP – but it’s just not possible. You can create a pixel-based image that sort of looks like it’s done in the same style as a vector graphic, but it seems like a waste of time to me when there are so many great options available for creating actual vector images.

Technically, yes, you could create a complex series of paths in GIMP and use them to fill new layers each time you wanted to make an edit to your drawing, but why waste your time?

With the same amount of time and effort as you would spend drawing the paths in GIMP, you could create a real vector image in Inkscape or Affinity Designer. You’d be able to edit it to your heart’s content, and you’d be able to finish your project in far less time with far less aggravation.

Tldr: use the right tool for the job. GIMP is not a vector graphics program, but there are plenty of great options available to vectorize your images.