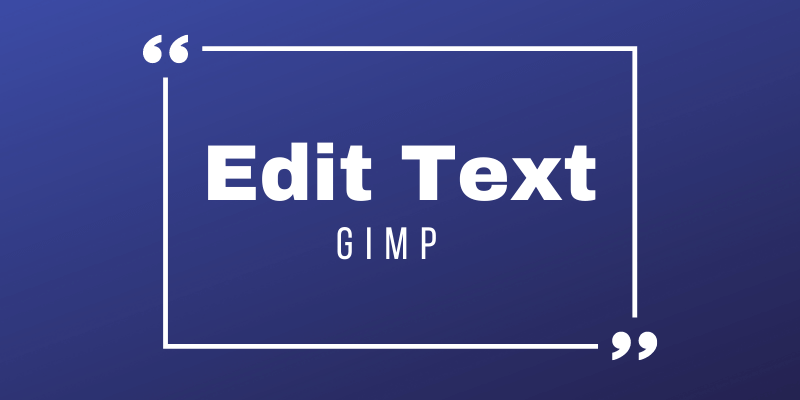 Working with text in GIMP can be a bit difficult, even if you’re familiar with image editing and digital typography. Along with the basics of how to edit text in GIMP, I’ve put together a few of the most useful tips and tricks that will make your life easier when you’re working with text.

Here are two different methods for editing an existing text layer in an open GIMP file:

Select the Text tool in the toolbox, and click on the text in your GIMP image. As long as it’s still editable, the Text tool popup will appear and your text box will be outlined.

In the Layers panel, locate your text layer and right-click it. In the layer properties popup menu, select Edit Text on canvas from the very top of the list. If your text is editable, the Text tool popup will appear and the textbox surrounding it will become visible.

If these methods didn’t work for you, then you might have accidentally converted your text into pixels, which means it’s no longer editable as text. You can either use the Undo command until it’s editable again or re-create the whole text layer from scratch.

As I said at the beginning, working with text in GIMP can be very difficult. If you’ve got the time, read on for an explanation of why GIMP works like this and what you can do to stop it from happening next time you need to edit text in GIMP.

Saving With the Right Format

If you want to be able to edit your text layer in a future editing session, you’ll need to save your file in a format that supports layers. JPG is the most popular image format in the world, but it’s not designed to store layer data, so it won’t be good enough to store your text in an editable format.

Instead, it’s best to use GIMP’s native XCF file format. This will allow you to store all the possible information GIMP has about your file, including the various layers, masks, paths, and any other content that would be lost by saving in a flattened format like JPG.

GIMP makes a big deal of separating the two concepts of saving your work and exporting your work. Saving your work is simply storing it again for future use in GIMP, which is why GIMP forces you to choose the XCF format if you open the File menu and choose Save or Save As.

Exporting your image is preparing it for sharing with someone else, and so has a whole separate set of processes for each different format type, but only a few like PSD and TIFF support saving layers, and even then you may run into issues depending on the compatibility of different editors.

Why Can’t I Edit My Text in GIMP?

When you create a new textbox with the Text tool, GIMP stores any text you type in as vector shapes – but once you apply any edits to the layer, GIMP will rasterize the text, a process that converts the editable vector data into pixels.

In other words, GIMP turns your text into a picture of the text, sort of like pressing a well-inked date stamp onto a page. Once you’ve stamped it, you can’t change the date afterward. If it happens in GIMP, you’ll have to use the Undo command and start again – at least it has that advantage over the physical world!

This rasterization process happens anytime you apply an edit to a text layer other than a basic move or scale command. Even something as simple as rotating the text will force GIMP to convert it to pixels (although I’ve discovered a trick that lets you write vertically anyway, which I’ll explain below).

It’s easy to tell when a text layer has been rasterized, since its layer thumbnail changes from the A icon used to indicate a text layer and becomes a small preview of the rasterized pixels found in the other layers, like the one above it containing the image of Wilber.

This whole process is fairly frustrating, but it’s a legacy of the long development of GIMP and its general unwillingness to handle vector data. Along with basic Bezier curve paths used to create selections or align type, entering text is the only other common usage of vector graphics in GIMP.

There is one other method for editing text in GIMP, although it has its own unique weirdness: the Text Editor. The Text Editor allows you to edit your text in a separate popup window instead of using the Text tool overlay that sits above your text box.

It doesn’t allow you to do the same basic changes like typeface and font size, and it doesn’t even show you what your text will look like in your chosen font – but you can use a variety of different writing styles, including support for the right-to-left reading order used by some non-English alphabets.

Notably, it also allows you to write vertically while still maintaining your text as editable vectors. This allows you to easily change text written at a 90-degree angle to the standard baseline, even though if you had written the text normally and then rotated it with the Rotate tool, GIMP would rasterize it.

I’m not sure why GIMP is this limited when it comes to typography, but hopefully, you’ve now got a better sense of what you can expect while editing text in GIMP and what pitfalls to avoid.

Hopefully, text editing will get revamped in the next version of GIMP that’s currently under development, but considering that it took them 6 years to go from version 2.8 to version 2.10, it’s probably worth learning how to edit your text in the current version instead of waiting – even if it’s full of strange quirks.