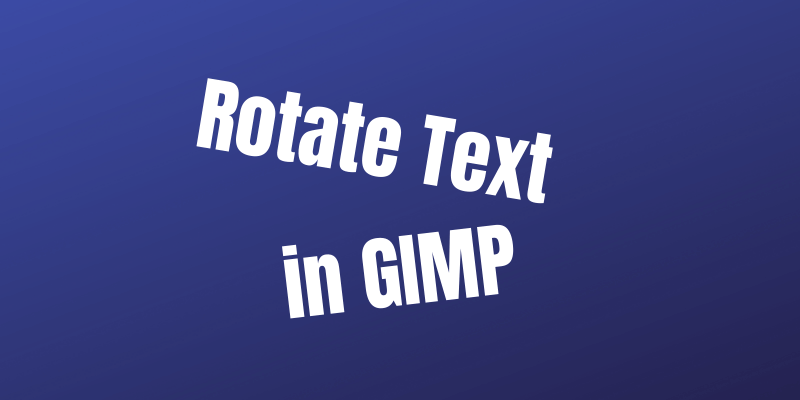 Working with text in GIMP can be a bit difficult, even for the experts. Text handling has improved dramatically in modern computing since the original release of GIMP, but sometimes it still feels like you’re working in the bad old days of digital design.

Rotating text in GIMP is very easy – as long as you don’t need to edit any of it afterward. While your text is being typed in and edited, GIMP stores the letterforms as vectors that can be scaled to any size without losing quality (almost the only time it ever uses vectors, really).

But as soon as you apply any amount of rotation, shearing, or any other transform operation other than scale and move, GIMP will rasterize your text, turning it from vector outlines into pixels. This will let you rotate it, but if you want to edit the text, you’ll have to start all over again.

Rotating your text is just as easy as rotating any layer or image object in GIMP. Check out how to rotate text in three quick steps below.

Step 1: Switch to the Rotate tool using the toolbox or the keyboard shortcut Shift + R

Step 2: Make sure your text layer is selected in the Layers panel, and click and drag to rotate your text

Step 3: When you’re happy with the angle, click the Rotate button in the Rotate tool popup window

That’s all there is to it! If you look closely at the Layers panel, you’ll see that the layer thumbnail for your text layer has changed from the grey A symbol used to indicate a text layer into a pixel preview of the layer content.

There are a couple of other options to discuss, but those are the basics. Read on if you want to get fancy with your rotation, but it’s fairly self-explanatory.

Sharp-eyed readers will have noticed the small crossed circle in the center of the layer while using the Rotate Tool (see below). This is called the pivot point, and as you’d probably guess, it’s the point your text will rotate around.

You can click and drag the pivot point and move to any point you want.  Although most of the time it’s easiest to leave it in the center.

It can be very useful for creating specific alignments, and you can use the Rotate tool overlay to precisely and easily place the pivot point at the corners, edges, or center of the image.

While dragging your rotation, you can hold down the Shift key to restrict rotations to 15-degree increments, which is a nice touch – although I’d still prefer to be able to edit my text after it’s rotated.

Vertical Text with the Text Editor

If you want to set your text at a 90-degree angle, it’s possible to do it in GIMP while still keeping your text editable. Yes, really – even though many posts say it’s impossible! It just requires that you use the Text Editor feature of the Text Tool.

In the Text tool options, there is a small checkbox marked Use Editor. This will give you a popout window with a few additional tools, although creating editable vertical text is the only use case I’ve found personally for the tool. My understanding is that it’s a leftover from a previous version of GIMP, but I’m not entirely certain.

It’s actually more of a button than a checkbox, but that doesn’t matter. The point is that the Text Editor gives you access to text orientation controls such as right-to-left text used by many different languages around the world, as well as the handy option Vertical (right to left, mixed-orientation).

It’s a bit of a mouthful, but it does the job. It still won’t let you type on a 45-degree angle or anything other than 90 degrees, but it’s better than not being able to edit your rotated text at all!

That’s everything there is to know about how to rotate text in GIMP, along with an extra tip that many GIMP users have never used before. I’m hoping that the next version of GIMP will have a much-improved text handling system, but we’ll have to wait with bated breath until the actual release date to find out.