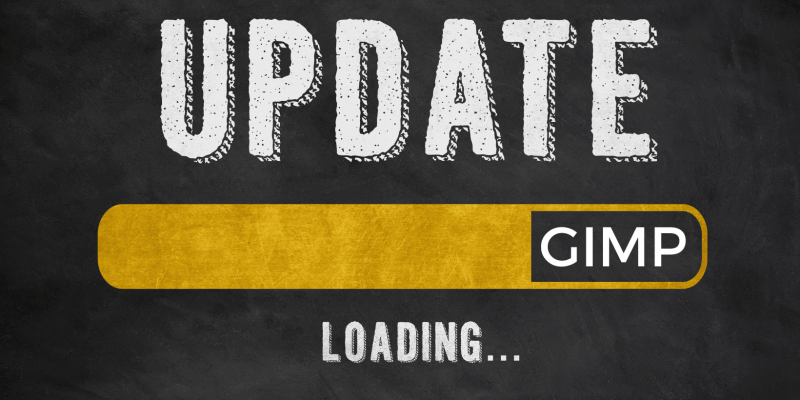 Keeping up to date with the latest releases is one of the most important – and most ignored – tasks in the software world. Despite the benefits of bug fixes, increased stability, and brand-new feature releases, many users aren’t sure how to update GIMP, but it’s easy once you know how!

Unfortunately, GIMP doesn’t allow you to update to a new version from directly within the app, but you can check your current version by opening the Help menu and choosing About GIMP. If there’s a new version available, the link will take you to the official downloads page at GIMP.org.

If your version of GIMP is so old that you don’t have these helpful links, just proceed straight to the official downloads page anyways, and prepare yourself for the big changes you’ll be seeing from the latest version of GIMP!

Once you’re at the official site, simply download the new version of GIMP using the direct download link and install it the way you would any other software. GIMP should automatically remove the previous version and then install the latest version, leaving your settings intact.

That’s all there is to updating GIMP, but if you want to learn more, I’ll take you through each step for the major operating systems, Windows 10, macOS, and Debian-based Linux distros like Ubuntu. I’ll even show you how you can test out a new and updated beta version of GIMP!

When it’s time to update GIMP, you don’t want to lose all your custom settings like fonts, brushes, plugins, and other configuration details. Many tutorials tell you that it’s ok to put your files in the main GIMP system folder, but they may be overwritten during version updates.

To make sure that all your settings stay nice and safe, be sure to install any customizations in your profile’s GIMP folder, instead of in the system GIMP folder. Any other preferences that can be transferred to the new version will also be stored there automatically.

How to Update GIMP on Windows 10

Updating GIMP on Windows 10 is extremely easy, and it works just the same as installing GIMP for the first time. Click the link in your About GIMP window as outlined above, or visit the official home of GIMP downloads here and get the latest version for Windows 10.

The About GIMP window in GIMP 2.10.22 running on Windows 10. The mascot’s name is Wilber, according to the ancient GIMP records

Run the installer from your browser or find it in your Downloads folder. Follow the on-screen prompts to install the latest version GIMP. Any previous versions you may have installed will be automatically removed by the installation program for the new version, which is a nice touch!

Assuming all goes well with the installation, you should now be running the latest and greatest version of GIMP, with all your settings, brushes, patterns, and so on ready to use on your next project.

How to Update GIMP on macOS

Updating GIMP on macOS is just as simple as it is on Windows, and just as easy as the first time you installed it. While you can’t rely on the App Store to handle your GIMP install, it’s easy enough to for yourself.

You can check for updates by opening the About GIMP window in the GIMP menu, but they aren’t always released as regularly as updates for the Windows and Linux versions of GIMP.

You can also cut to the chase and go straight to the official GIMP downloads page. Check the version number of the latest release and compare it to your version, then use the direct download link (or any mirror from around the globe) to download the latest version of GIMP.

Run the installer from your browser’s downloads page or open Finder and look in your Downloads folder to get things going. The GIMP installation process will start, and you just have to drag and drop the GIMP icon into your Applications folder as usual.

The new installation will also overwrite any previous versions of GIMP that you might have installed, so don’t worry about trying to uninstall them by hand. That’s all there is to know about how to update GIMP on your Mac!

How to Update GIMP on Linux (Debian/Ubuntu flavors)

Last but certainly not least we come to Linux. GIMP has a special place in the heart of Linux users, as it’s arguably the best pixel-based image editor available for any Unix-based environment (though that might just be because it’s almost the only one).

Unfortunately, the most popular GIMP repository mirror for use with apt-get has been suspended recently for personal reasons by the user who ran it, so the simplest method is to visit the official downloads page and download it without a terminal command. I know it’s not ideal, but…

If you’re using Snap for application management (or you’ve got it installed by default, like on Ubuntu), you can still download and install the latest version of GIMP by typing this in a terminal window: sudo snap install gimp

Unlike the other operating systems that have nice wrap-ups at the end, that’s far from everything there is to know about how to update GIMP on Linux – but it’s definitely all that we have time for today! If enough of you are looking for more answers, I might wind up writing a Linux guidepost.

Updating To A Beta Version of GIMP

If updating to the latest stable version of GIMP isn’t enough for you, the GIMP developers have made a beta version of GIMP available. Listed as version 2.99.4 as of this writing, I assume this is because it’s going to eventually be released as GIMP 3 once it reaches full stability.

It’s cool to explore, but all bets are off when it comes to how GIMP 2.99 operates since this is the in-development cutting-edge super-hyphenated version of GIMP, not a stable release intended for general usage.

The warning on the development page that JPG, PNG, TIFF, and FLI export isn’t working should give you some idea of what you’re in for if you decide to update to this experimental version of GIMP.