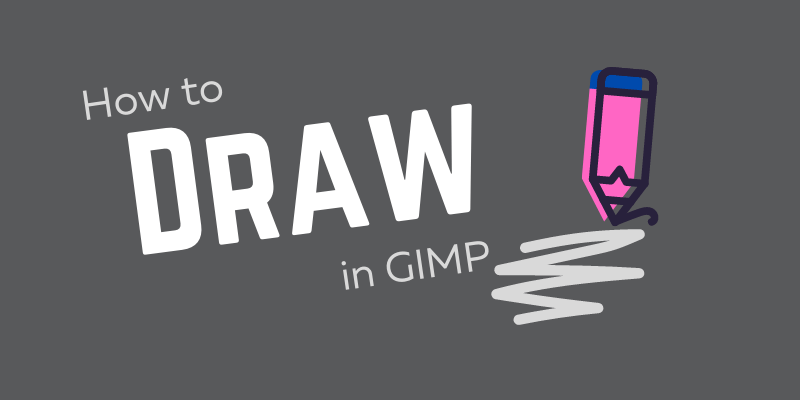 GIMP is an amazing piece of software that can do almost anything you want to an image, from photo retouching to creating photorealistic collages. GIMP’s excellent brush-based editing tools can also be used for digital drawing, and ever since version 2.10, GIMP has been bundled with the impressive MyPaint library for more realistic paint effects.

Before we get started though, it’s important to point out that GIMP isn’t really designed for drawing. You can definitely use it that way, but it even says in the official documentation that it’s not intended for drawing.

At the end of the post, I’ll include links to some other apps that are much better choices for drawing. There are even a couple of other free, open-source options!

I’m a photographer, not a painting, but I know the technical side of drawing in GIMP. If you really have to (or just really want to) use GIMP, here are the best methods for drawing in GIMP.

This is certainly the simplest method for drawing in GIMP, although it can be hard to do with a mouse. If you’re serious about digital sketching, drawing, or painting, I strongly recommend that you buy yourself a graphics tablet.

A drawing tablet transforms the whole process of interacting with GIMP, and they usually come with a pressure-sensitive stylus and handy shortcut buttons.

You don’t need to spend a huge amount of money on a fancy one since even a small cheap drawing tablet will give you better results than trying to do serious brushwork with a mouse.

Your tablet might not work instantly with GIMP, so I’ve prepared a different guide on how to use pressure sensitivity in GIMP.

Once that’s out of the way, the only secret is to learn to use the various brushes. You can use the Paintbrush tool, the Pencil tool, and the Ink tool, but the really impressive visuals come from using the MyPaint brush, which is stacked in the same section as the other three.

The MyPaint brush uses the open-source MyPaint library created by the app of the same name, but it’s not just for painting. There are a huge number of brushes that recreate all kinds of drawing media, from pencils to charcoal to pastels, and even blending tools.

If you want a more detailed explanation of the MyPaint system, check out my article on how to paint in GIMP.

If freehand drawing isn’t your style (or within your ability, like yours truly), you can use a different method to draw in GIMP: strokes. The stroke system allows you to create a selection or a path and then have GIMP trace the outline with a solid color, a pattern, or even one of the many brush-based tools such as the MyPaint brush.

To get started, create your shape template using one of the selection tools or the Paths tool. Selections are quick and easy, but using paths allows you to create more flowing, freeform shapes with relative ease.

Selections are best used for drawing the simple shapes that you can make using the Rectangle Select and Elliptical Select tools. You could also use selections created by the Fuzzy Select tool or any of the other selection tools, but only if you’re drawing on an image that has something in the background for them to work on.

Once you’ve created your selection, open the Edit menu and choose Stroke Selection. If you’d prefer to create a solid shape instead of an outline, use Fill Selection instead, but the process is basically the same except you can’t use paint tools to fill.

GIMP allows you to set the options, choosing from a solid color, a pattern, or a paint tool – including the MyPaint system, although it’s listed as Mybrush for some reason. GIMP will apply the currently selected foreground color, pattern, or brush tool settings as soon as you click the Stroke button.

If you’ve opted for the paths method, you’ll have easy access to the Fill Path and Stroke Path commands in the Tool Options panel (shown below).

Once you’re satisfied with the shape of your path, simply click the Stroke Path button and GIMP will allow you to choose from the same set of options: to apply a solid color, a pattern, or a paint tool along with the shape of the path.

The Fill Path options don’t let you apply paint tools, so it might be better to fill any shapes by hand if you want to use MyPaint brushes for drawing.

There are other drawing apps that can work better than drawing in GIMP.

As you might have guessed, MyPaint is the source of the MyPaint brushes in GIMP that I mentioned earlier. While it’s nice to have them available to GIMP users, using them with the original app is a much more enjoyable experience.

Since it was designed for painting and drawing from the start, it offers a number of helpful features that aren’t readily available in GIMP.

Sketchbook is another great free drawing/painting/illustration app, although it also has a paid service tier available. Formerly Autodesk Sketchbook, this app originally started as a free program, which was then purchased by Autodesk, who eventually turned it back into a separate company once again.

Despite this confusion, it’s definitely worth a look thanks to its unique interface and responsive drawing engine.

Inkscape almost feels like a companion app to GIMP, even though there’s no official connection between the two. They’re arguably the two best open-source graphics apps available, and they’re both free, but Inkscape focuses on vector graphics instead of raster graphics.

This makes it a great choice for graphic design illustrations, but not as well-suited to freeform drawing. Combining it with sketches created using one of the other two recommendations in this list will give you a neat all-digital ideation workflow if you’re into that sort of thing.